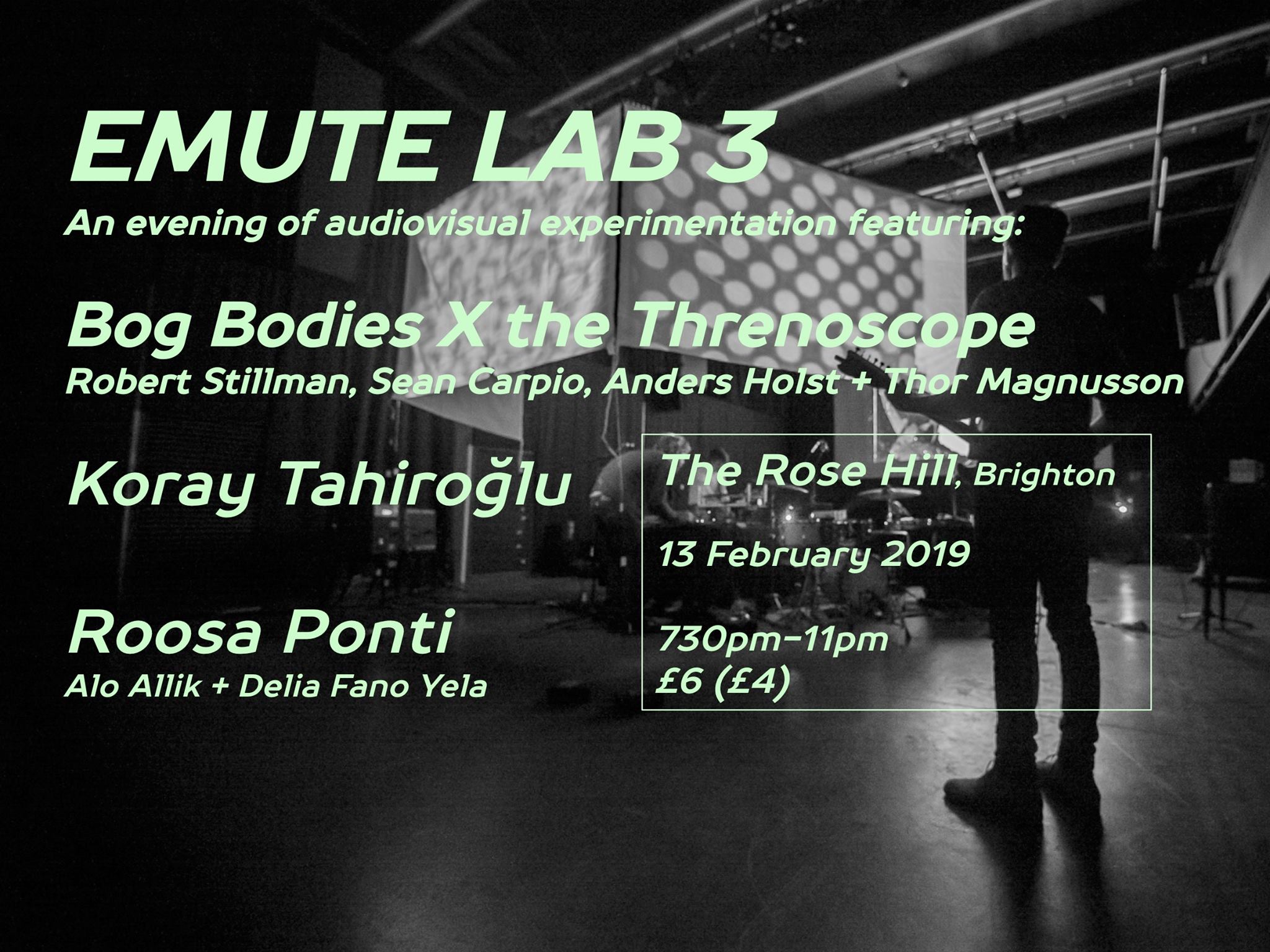 This programme will feature three acts exploring the interaction of sound and image.

Bog Bodies sound breaks down distinctions between composition and improvisation, electronic and acoustic sound, abstraction and figure. Their distinctive musical style reflects the eclecticism of the band members’ individual careers (they have collaborated with artists such as Manuel Göttsching, Kit Downes, and Joachim Badenhorst), and to the broad range of music from which they take inspiration, which includes James Blood Ulmer, Sunn O))), Archie Shepp, and Supersilent. Their first album, ‘Sligo’ was released in 2017 on Migro Recordings.

The Threnoscope is a microtonal drone instrument that provides a context for improvisation of microtonal music where both the live coder and the instrumentalists influence the piece’s development. The Threnoscope is notated through live coding, with sound characteristics and speaker locations being visualised on a projected graphical score. Musical notes move around the spectral and physical space, long in duration, and sculptable by the performer.

Roosa Poni is a collaborative band of Alo Allik and Delia Fano Yela. Allik is an Estonian sound artist who has performed his live coded electronic music and generative computer graphics throughout the world. His aesthetically and geographically restless lifestyle has enabled him to traverse a diverse range of musical worlds including DJ-ing electronic dance music, live electronic jam sessions, electroacoustic composition, free improvisation and audiovisual performances. He has forged collaborations with a number of curious and innovative musicians, writers and visual artists along the way focussed on exploring links between science, technology, creativity and tradition. In recent years he has been developing a musical style he describes as noisefunk which derives its form from ancient tribal rhythm patterns and its sonic nature from evolutionary synthesis algorithms. Currently, Alo works as a researcher, programmer and lecturer in London, while continuing to perform his music and visuals to audiences worldwide.

Koray Tahiroğlu is a musician, Academy Research Fellow in the Department of Media, Aalto University School of ARTS. He is the founder and head of SOPI (Sound and Physical Interaction) research group. He practices art as a researcher focusing on digital musical interactions, as well as a performer of live electronic music. Since 2004, he has been also teaching workshops and courses introducing computational strategies and methodologies for artistic exploration of interactive music. Tahiroğlu has performed experimental music in collaboration as well as in solo performances in Europe, North America and Australia.

Tickets at the door, or even better, on Eventbrite.