At Emute Lab, several of our members have been concentrating their research efforts on building and performing with feedback instruments. You could define a Feedback Instrument as an instrument whose behaviour depends on the circulation of signals, and manipulation of the way in which these signals circulate around the instrument. These instruments could be acoustic, electronic, digital, or hybrid. Feedback will be the core of how they make sound and/or how musicians interact with them.

There’s a great deal of activity in this area around the world at the moment, and here, I will attempt to highlight some of the recent developments in feedback instrument design and musicianship. But before leaping into current work, let’s take a look at some past instruments and pieces that have had a big influence on today’s developments.

This is from Radigue’s collection of early feedback works.

This piece uses shifting microphone-room feedback. Originally created in 1974, but here’s a newer revision from 2010.

Feedback was a key part of Tudors compositions and installations. This piece from the early 90s was created using repurposed neuromorphic hardware, which enables the creation of highly complex analog feedback systems.

In Emute Lab, feedback instruments take a variety of forms. Halldór Úlfarsson is the designer of the Halldorophone, and a growing family of new instruments that are descendents of his design. This family of string instruments use inbuilt speakers and exciters, together with individual string pickups and external processing to create a feedback loop. Halldór is researching his PhD in Emute Lab, and has recently developed two new instruments: The Sisters.

This is an early Halldorophone from 2009, played by Hildur Guðnadóttir.

Hildur plays the Halldorophone on several film soundtracks, including the Chernobyl soundtrack, for which she recently won an Emmy award.

This video shows a Halldorophone-DIMA-A duet. Composition by Johan Svensson, performed by My Hellgren and Jari Suominen

Alice Eldridge and I collaborated with Halldór to develop the Feedback Cello. These instruments are based in the Halldorophone design, as augmentations (and/or invasions) of the traditional acoustic cello. They have a speaker mounted in the back of the cello.

We have built two of these instruments, with different augmentations. 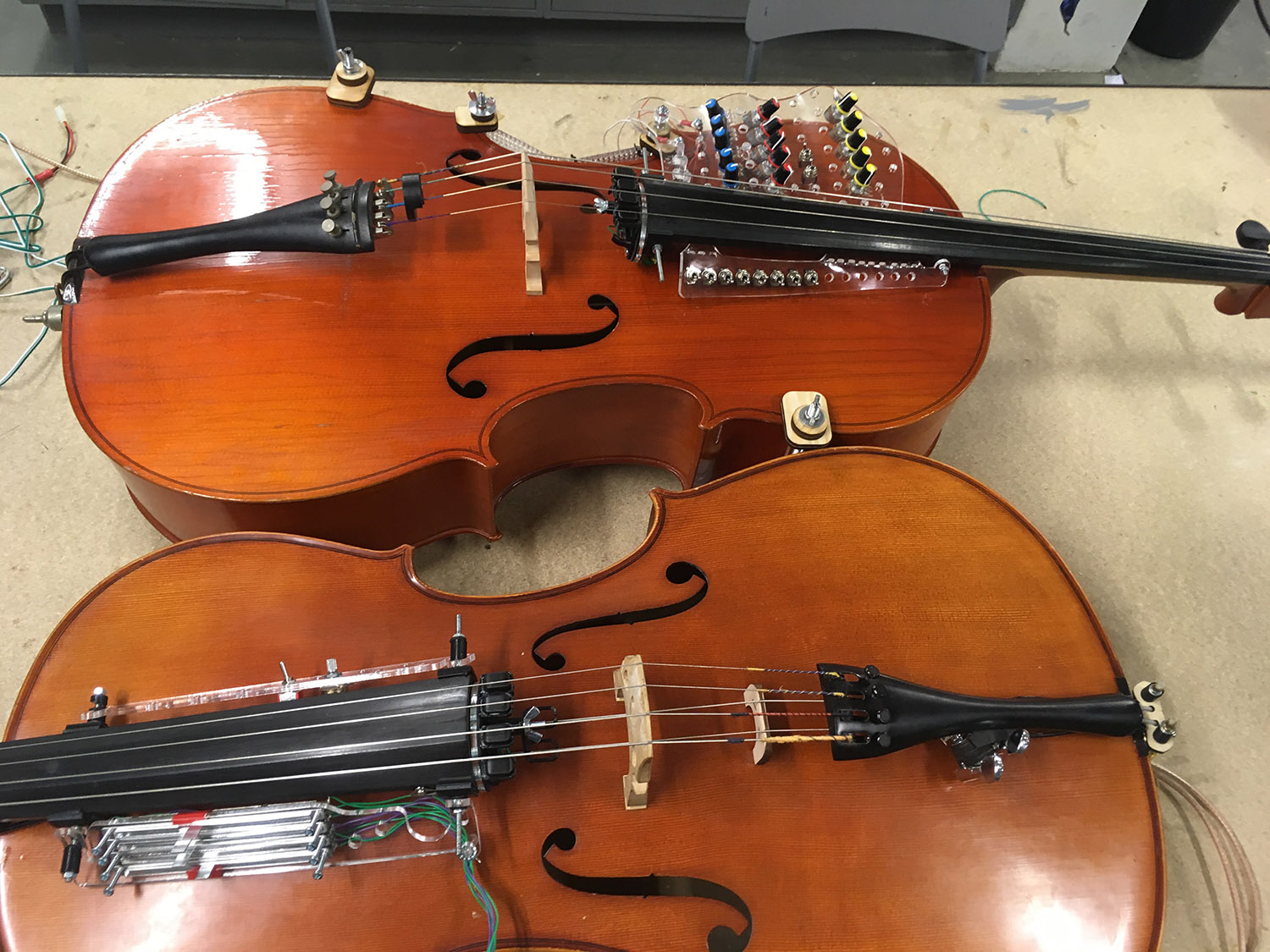 Here is a recording of a Feedback Cell performance from 2017, using the two cellos. 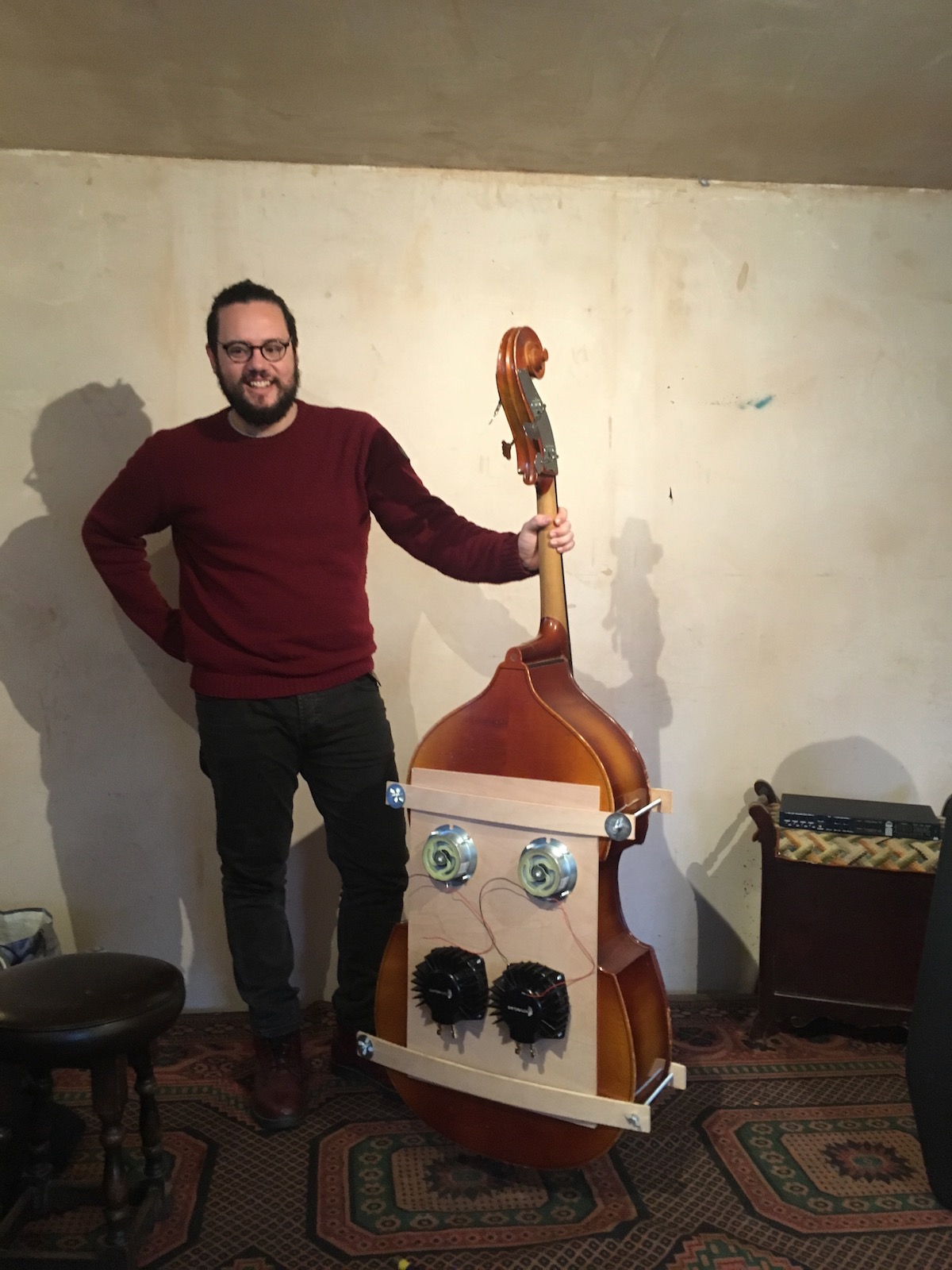 The above three instruments, together with Thor Magnusson on Threnoscope, form Brain Dead Ensemble. 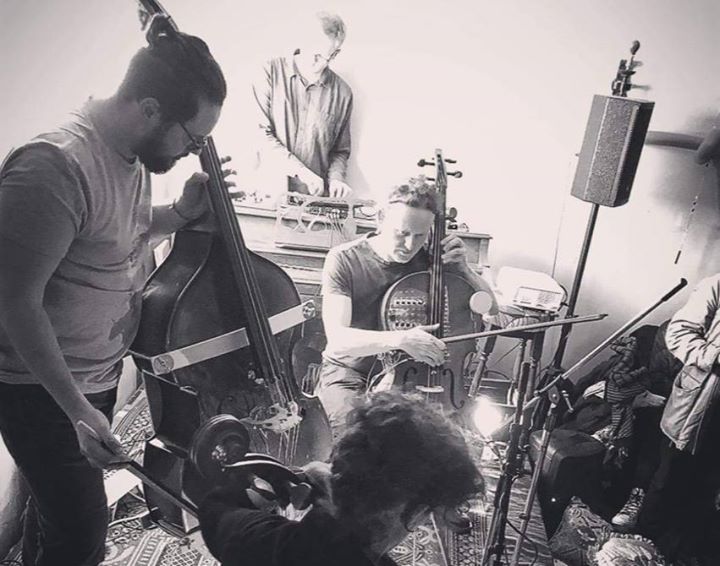 You could call this a ‘feedback ensemble’, as the Threnoscope is connected to all of the instruments, and the instruments affect each other acoustically during performance. This is their album ‘EFZ’.

Halldór has also developed a Feedback Double Bass with Adam Pultz, this time invasively with a mounted speaker.

You can read some more about this and brain dead ensemble in the ICLI 2018 proceedings.

Moving outside of Emute Lab, here are some more instruments based on the feedback principle.

Tom Davis and Laura Reid: The Feral Cello. This instrument has an exciter and pickup, that runs through DSP processing in a duet between cellist and laptopist.

This is Dan Overholt’s Overtone Fiddle. Dan says: ‘This performance uses feedback via DSP filter-banks, set up to emulate an extra bank of resonant strings (simulating to some extent, the “hardanger fiddle” setup but with variable/extended feedback resonances).’

This is the Feedback Lapsteel, by Jiffer Harriman.

Christian Blandhoel is a Norwegian noise musician, who has created a expansive range of Feedbackers. Here’s a video of one of them, and more on his youtube channel.

This video shows a concert with two feedback instruments.

Half-closed Loop by Till Boverman (from the beginning). This is custom-designed, using a brass pipe, wooden board with exciters and microphones. In the second half (from 11:50) we move into feedback brass, with Ingi Garðar Erlendsson playing the Thranaphone #2, a feedback tuba (with Eiríkur Orri Ólafsson playing Trumpet). This instrument has a speaker mounted in the tuba and a mouthpiece microphone; the signal is processed through guitar pedals.

Lesley Flanigan uses custom-instruments based around microphone-speaker feedback. This is a concert from the Guggenheim Museum, New York from 2014.

There are also some great software instruments out there. Tom Mudd uses a network of interacting chaotic oscillators in Gutter Synthesis.

Dario Sanfilippo specialises in music generated from complex adaptive feedback systems; this is a performance of ‘Single-Fader Versitility’.

In audio-visual feedback systems, there’s a cross-modal flow between sound and image. This is Mick Grierson with a live performance of ‘Stench’.

These are some highlights of contemporary feedback instruments, which take a range of forms. These instruments can be challenging but also extremely rewarding to play. The challenges come from dealing with the complexity of highly sensitive dynamical systems, and changing from conventional modes of instrumental control to shared agency with the instrument. The rewards are to break into new sonic territories and to discover some radically new ways of playing music.